Starkey is the leading American company in the hearing aid industry. Based in Minnesota, Starkey is committed to advancing technology and access to hearing health. Their research into new hearing aid developments is strictly driven by the priorities of people with hearing loss, keeping pace with today’s busy lifestyles. Starkey’s pragmatic approach has led to user-friendly innovation and durability.

The Starkey Livio AI hearing aid model is the latest contribution from Starkey to the world of hearing aids. It was considered the world's first 'Healthable' hearing aid using integrated sensors and artificial intelligence and the first to track cognitive and behavioral activities. More than just a hearing aid, it is a platform for better health and well being.

The Livio Ai has changed the very concept what a hearing aid is. With advanced environmental monitoring that helps boost sound quality, fall detection warnings, body movement tracking, geotagging and remote programming, some of the most cutting edge technologies are all packed into one model. In recognition of Starkey's accomplishments, Livio AI has earned a spot on TIME's 2019 list of the best inventions of the year.

The line of products Starkey produces is shaped by their customers’ priorities. 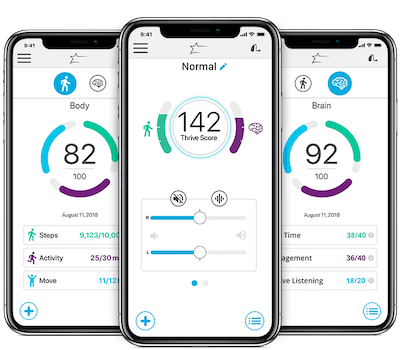 Starkey was the first hearing aid manufacturer to introduce Invisible-In-Canal hearing aids that maximize power in an incredibly compact and discreet shape. Their product line features the innovative made-for-iphone Halo iQ and the rechargeable Muse iQ that uses lithium ion batteries to replace standard disposables. With the launch of the Livio AI, the integration of hearing aid into total health is mediated with their Thrive app that incorporates fitness data from sensors within the hearing aid.

The line of products Starkey produces is shaped by their customers’ priorities. They focus their research on developments that will be immediately in-demand and extensively test new products to insure they will be intuitive to use. Starkey hearing aids seamlessly incorporate app controls and custom tinnitus relief. With the introduction of the new Thrive app, Starkey seeks to merge healthy hearing and healthy living, honing cognitive acuity and keeping pace with other health metric.