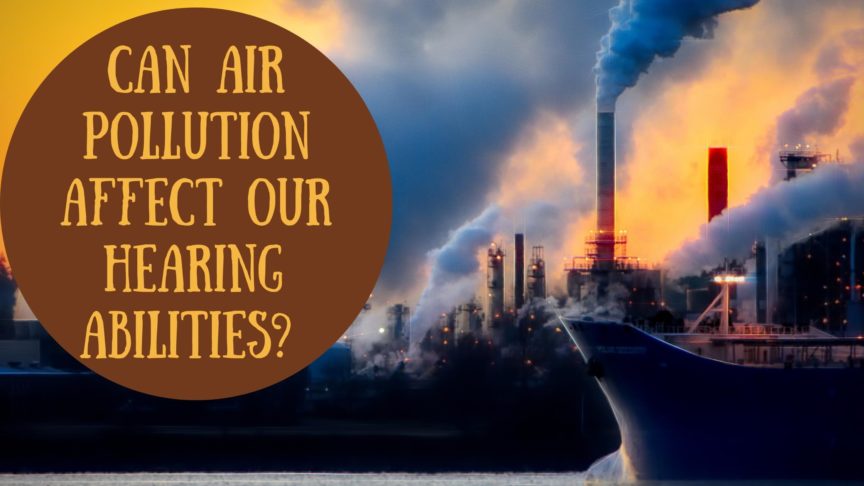 Hearing loss is one of the leading chronic health issues in the United States, with nearly 40 million Americans over the age of 18 reporting some trouble hearing. The strongest predictor of hearing loss in people between the ages of 20-69 is age. While the natural aging process is surely responsible for much of the decline that happens in our hearing system, there are other factors that can contribute to damage.

A recent study revealed that air pollution can cause a decline in our hearing health. Specifically, researchers found that exposure to varying levels of carbon monoxide (CO) and nitrogen dioxide (NO2) were positively linked with increases in incidences of hearing loss.

What is air pollution?

When we say air pollution, we are referring to — you guessed it — pollutants released into the air. The World Health Organization (WHO) estimates that air pollution causes almost seven million deaths globally each year. 90% of humans on the planet are breathing air every day that surpasses the WHO’s guidelines for air pollution levels.

In the United States, that number is slightly lower at about 40% of people breathing highly polluted air. This is thanks to the 1970 Clean Air Act, which authorized the Environmental Protection Agency (EPA) to regulate air quality and work towards reducing levels of air pollution. The most common types of air pollution in the US are mercury, lead, dioxins — as named in the hearing loss study — and benzene.

Where does air pollution come from?

Air pollution is produced when fossil fuels are burned, such as in running an automobile or other non-electric engine, and from industrial sources like oil and gas drilling. Our levels of air pollution will fall when we make marked shifts to cleaner energy sources.

Published in the International Journal of Environmental Research and Public Health and using data from the National Health Insurance Research Database in Taiwan, the study examined data from 75,767 participants over 20 years of age. The conclusions reached in the study were focused on those who had no history of sensorineural hearing loss.

Researchers found that as exposure to air pollution increased, so did the risk of hearing loss.

The type of hearing loss that is a result of air pollution is sensorineural hearing loss, which means that it is hearing loss that happens because of damage to the inner ear. The fine cells located in the middle ear are sensitive and non-regenerative. That means that they do not repair themselves if harmed and your body will not produce new ones when lost.

They are integral parts of your sense of hearing. The ears collect sound information from the world around you, but it is the cells of the inner ear that receive the information and transmit it to the brain via the auditory nerve. As these delicate cells decline, the actual amount of sound information your brain receives gets smaller. The effect of this is the experience of hearing loss.

The symptoms of early hearing loss are subtle, and it may just seem as though people around you are mumbling. Hearing loss is a difficult condition to self-diagnose and your best bet is to see our team for an expert opinion.

Ways to protect yourself from air pollution

Short of lobbying your representatives for increasingly strict mandates to curb air pollution, there are few ways to fortify your ears from the very air around you. But, you should contact your representatives to tell them that you care about lowering the number of pollutants in the air today. Climate change will only exacerbate the levels of air pollution around us, as it feeds a dangerous cycle of warming the planet and higher amounts of pollutants being trapped in Earth’s atmosphere.

You can check the air quality in your neck of the woods by clicking here.

Ways to protect yourself from hearing loss