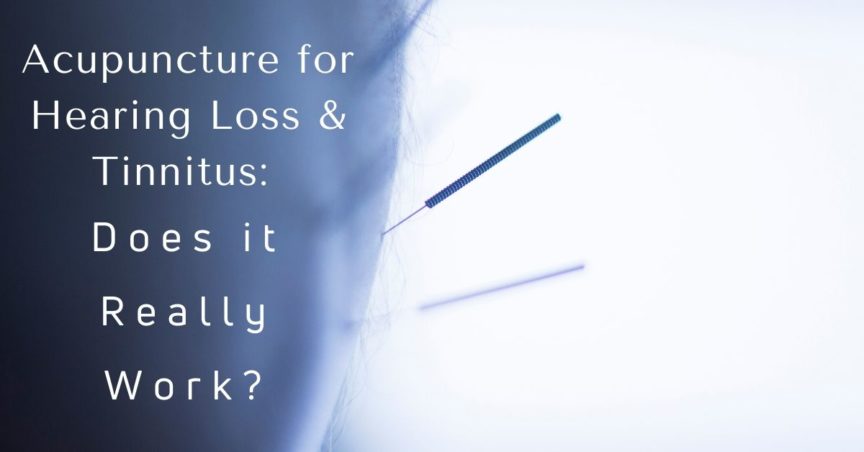 Acupuncture has been a practice of Chinese medicine, dating as far back as 100 B.C. with claims of treating or relieving symptoms of many diseases, including asthma, back pain, carpal tunnel syndrome, fibromyalgia, mild headaches, migraine headaches, osteoarthritis, sciatica, stroke, and nausea. If these claims don’t seem promising enough already, providers also claim that acupuncture can also be used to treat deafness and hearing loss. Are these claims valid or is acupuncture full of false promises?

Acupuncture is just one of the elements that make up traditional Chinese medicine which is a combination of physical, mental, and spiritual practices, like massage, acupuncture, herbal medicine and mind-body exercise. Acupuncture is said to have amazing effects across a wide range of ailments by promoting natural healing which can improve function using needles inserted into specific points of the body along with precisely applying heat or electrical stimulation. While this might be hard to believe for skeptics of the practice, acupuncturists are independently licensed healthcare practitioners in the United States.

How does Acupuncture work?

Traditional Chinese Medicine describes the practice of acupuncture working in cooperation with the total body and mind to create a balance, or a yin and yang. This reconnects the natural pathways of the body much, like the process of reconnecting broken electrical circuits.

As of now there is no single theory in western medicine that describes how acupuncture works. This is because acupuncture is said to work on so many different parts of the body to treat diverse illnesses, that it is hard to create proof of the validity of each individual treatment for each ailment. However some western doctors believe acupuncture works by regulating the nervous system, which aids in the stimulation of things such as endorphins and immune system cells at specific sites in the body. Some studies have even shown that acupuncture may alter brain chemistry by changing the release of neurotransmitters and neurohormones. This can stimulate the immune system and help to regulate blood flow, blood pressure and body temperature.

But Does Acupuncture Work?

While the theories of how acupuncture work seem promising there is still no solid proof in western medicine of its effectiveness. This is due in part to the question of the validity of studies, which seek to prove acupuncture’s success. Even so there are a wide range of patients who claim that acupuncture has helped them deal with the debilitating symptoms of all sorts of ailments including hearing loss and tinnitus.

Acupuncture began to gain popular use in the U.S in the early 1940 where reports claim that this form of treatment has helped with tinnitus and cured deafness. A 2006 study from China explored the success of treating hearing loss and sudden deafness with acupuncture. The study found that two-thirds of the 63 volunteers experienced a “therapeutic effect” from the treatment with less severe cases having greater success. Even so, western doctors refute the validity of this study due to the small size of the study insisting that the size of the study was too small and was conducted in china where medicine is practiced differently. Not only that but western doctors claim there is no proof that the positive effects of these studies were not more than placebo or a combination of outside factors.

After reviewing research on the treatment of tinnitus using acupuncture, the British Tinnitus Association concluded, “There is no evidence that this treatment is effective.” Even so acupuncture may work to lessen stress and anxiety, which can make the effects of tinnitus much worse. Many seek acupuncture as a form of stress relief making acupuncture a therapy that could potentially help tinnitus patients indirectly.

The bottom line: At Pacific Hearing Care, we treat hearing loss and tinnitus through tried and true methods. With comprehensive hearing tests and hearing aid fittings, our patients have reconnected to the sounds they had been missing. Though hearing loss is often permanent, the most common treatment for hearing loss are hearing aids which amplify the sounds around you and deliver them to your ears. To find out more, schedule an appointment for a hearing test and start hearing better as soon as possible!