Oticon is a world leader in hearing aids with over a hundred years of history backing it up. Founded in 1904 by Hans Demant, Oticon was a labor of love from the start. Impressed with new hearing technology worn by Crown Princess Alexandra, Demant sought to bring new hearing assistive devices to his wife and countrymen in Denmark. The company gradually transitioned from importing hearing aids to their development and manufacture, spurred forth by the international restrictions imposed by World War I and World War II.

The Oticon Opn S offers a 360 degree sound experience. Wearers can now hear things all around them, enabling the brain to discern speech among background noise.

Instead of blocking sounds in noisy environments by concentrating on one speaker, Oticon Opn S hearing aids uses its 360 degrees sound experience to give you access to relevant sounds around you and let you determine the sounds you want to concentrate on as the user. All this, with less effort to listen than ever before.

The Opn S wearable technology also means you can connect to your favorite wireless devices. Hands-free phone calls are possible with any smartphone using the ConnectClip accessory (sold separately) that allows you to respond directly to your hearing aid by transmitting the caller's voice from the phone to your hearing aids. And the built-in microphone sends your voice back to the caller effortlessly.

The user can also stream high-quality sound from their iPhone or iPad for music and other content such as podcasts and audiobooks and take phone calls. You can also stream your favorite TV shows and movies straight through to your hearing aids using the Oticon TV adapter.

With the Oticon Xceed family of power hearing aids, Oticon opens up to more speech all day long. Based on the powerful Velox S platform, Oticon's most advanced platform ever, and available in two BTE models, Xceed offers better speech clarity with less listening effort in noisy environments than the previous generation of super-power hearing aids.

Oticon Xceed uses 2.4 GHz Bluetooth technology to connect to compatible smartphones and a wide range of accessories. You can stream telephone calls and TV audio directly from your mobile to both ears, change your hearing aids, and much more.

Oticon Xceed:the most powerful hearing aid in the world

Oticon’s latest offering is the Oticon Xceed, considered the most powerful hearing aid in the world. No other power hearing aid offers Oticon's proprietary 'open sound experience'. To imitate how the brain itself makes sense of sound, Oticon Xceed checks the environment of the wearer 100 times per second. The integrated BrainHearing technology analyzes sounds from all directions, identifies speech and background noise, and allows users to classify where sounds come from, providing a more detailed, more realistic hearing experience. The capabilities of the hearing aid have not gone unnoticed - the device was recently named a CES 2020 Innovation Awards Honoree in the Health & Wellness category. 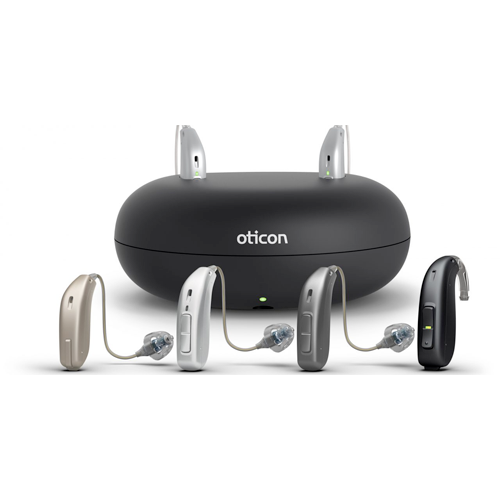 Oticon has continually extended the Opn family since the launch of the popular Oticon Opn hearing aids. This latest model, Opn S, offers people with hearing loss even more control over their sound environment. The interface built into Opn S easily tracks environmental changes with a 360-degree sound experience for hearing aid users. Thanks to the improved sound processing power, speech comprehension is equivalent to ordinary hearing for Opn S customers, even in tough hearing conditions, such as lively restaurants and social settings. Open S also features the new OpenSound Booster, which gives users extra hearing assistance in challenging environments. With OpenSound Booster, Open S users can activate their hearing aids to lower non-speech sound stimuli and background sound on demand so that they can focus more on their speech.

Oticon is focused on developing technology that matches the way the brain interprets sound.

In the mid-1960s Oticon became a global company, and paved the way for many modern standards in hearing aid technology. In the late 1970s, Oticon brought the first discreet in-the-ear device to market. Then, at the start of the 1990s, DigiFocus, the first completely digital sound hearing aid, was introduced. The company, long headquartered in Copenhagen, now calls Strandvejen home, but reaches over 100 countries with its cutting-edge hearing products.

Oticon is focused on developing technology that matches the way the brain interprets sound. This has led to their unique approach to sound processing called BrainHearing. Relieving cognitive strain is a huge advantage of treating hearing loss. With BrainHearing, sound is delivered to the brain in ways that are easier to adapt to and interpret. The instantaneous processing behind BrainHearing is capable of discerning multiple conversations and rich sound environments to help you pay attention to what is important. 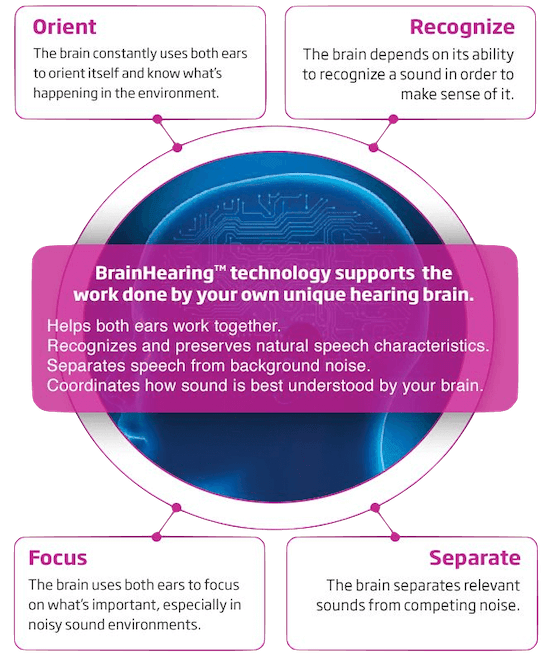 Not only does Oticon have a patented approach to managing sound, it is also forward-thinking in terms of digital connectivity. With the Oticon Opn, users can connect their hearing aid not just to their smartphone but with a wide range of other digital options. Alerts like messages from a digital doorbell can be streamed direct to your ear, so you won’t miss a thing. Oticon is also preparing to launch their AI driven Kaizn platform that can learn from your preferences and needs to automatically tune your hearing aid to the demands of the sound environment.