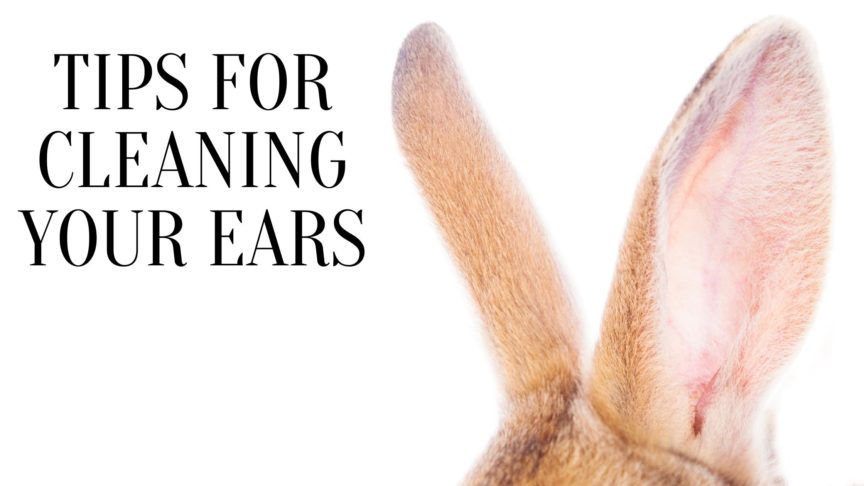 Have your ears been feeling blocked or clogged? Maybe it feels like the sounds around you are muffled or coming from far away. This could be a sign you have a buildup of earwax, and it may be time to clean your ears. Here are a few tips for safely cleaning your ears. And no, it’s not with a Q-tip.

What’s the Point of Earwax?

Earwax might seem a bit sticky or gross, but it’s actually very important. Earwax is what keeps your ears clean and healthy. The earwax in your ear canal will trap any dirt, dust, bacteria, or moisture before it gets to your eardrum. This protects your ears from injury or infection.

When the earwax catches these particles, it dries out and slowly works out of the ears while you’re chewing or swallowing. Then it falls out while you’re in the shower, or during your daily activities.

Signs You May Need to Clean Your Ears

However, earwax can sometimes buildup in the ear canal, and it can start to affect your hearing. This is called earwax impaction. It’s also more common to have a buildup of earwax if you wear hearing aids, since the earwax can’t naturally come out of the ear canal. Signs of impaction include:

If you recognize these signs, you may need to clean your ears.

How NOT to Clean Your Ears

The most important thing to remember is that you should never put anything into your ear canal! A good rule of thumb is to never clean your ears with anything smaller than your elbow. Putting small objects in your ear, like Q-tips, bobby pins, pencils, napkins, or your fingers, can make the earwax impaction worse. You can accidentally push the earwax further into the ear canal and make the problem worse. Using a Q-tip or any other small object can also scratch your ear canal or even damage your eardrum!

You should also avoid ear candles. These can actually damage your ear canal, and you run the risk of burning your face or your ear, or dripping candle wax into your ear canal.

Tips for Cleaning Your Ears

Earwax softener is another safe and effective way to remove earwax from your ear canal. You can buy an ear wax softener at your local pharmacy. Following the instructions on the bottle, tilt your head and put a few drops in your ear. Wait a few minutes, then tilt your head the other way to drain your ear. After a few days, excess earwax gets softened and flushed out of the ear.

When to Visit Your Doctor

If you have a buildup of earwax in your ear, you should visit your doctor. They can safely remove the earwax with a procedure called irrigation. This process simply uses warm water to flush out your ear canals and wash away excess earwax.

When to Visit Your Hearing Health Specialist

If you notice any changes in your hearing, if sounds seem muffled, or if you can’t hear clearly, make an appointment with us today! During our comprehensive hearing test, we’ll also perform a visual exam by looking into your ear canals. We’ll check for any sign of illness or infection, as well as looking for an earwax impaction. Then if you have hearing loss, we’ll help you find the right hearing aids so sounds will be crystal clear.