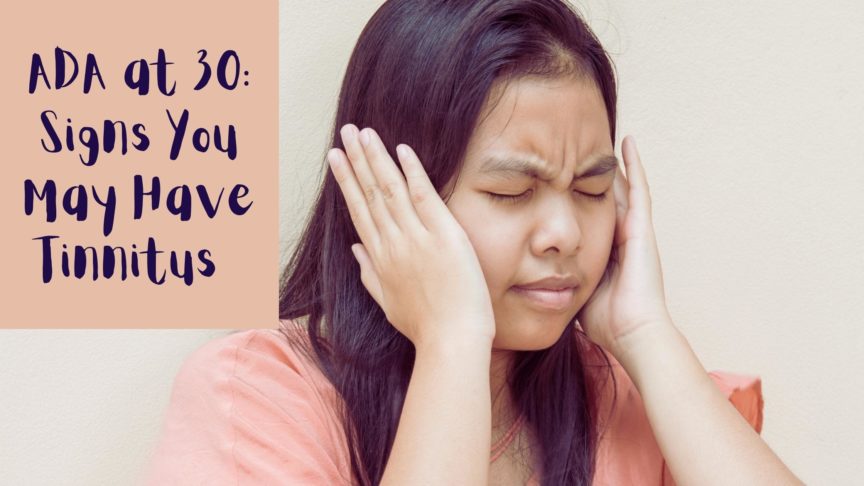 Do you ever find yourself at the end of a long and busy day, seeking quiet, only to be confronted with a persistent ring in your ears? This sound may seem to be coming from no particular place rather than your own head. This can induce the feeling of no escape and add stress, when you were only looking to unwind. Does this buzzing in the ears ever interrupt your sleep, making it difficult to focus and feel alert the next day? According to National Center for Health Statistics studies, tinnitus affects an estimated 32 percent of the U.S. population and is particularly prevalent for 70-85 percent of those who also have hearing loss. If you’ve ever heard a sound that is perceived as a buzz or ring or hum, it most likely is tinnitus. So, what can you do about it?

Tinnitus occurs when you experience ringing or other noises in one or both of your ears. Because there is such a high rate of people who suffer from tinnitus who also have hearing loss, it is believed that tinnitus is caused by damage to the inner ear. With hearing, damage can occur when exposed to loud noises, impact to the head, some drugs classified as ototoxic and chronic conditions such as hypertension, diabetes, or cardiovascular issues. These risks to hearing damage the tiny hair-like cells of the inner ear, called stereocilia. Stereocilia send audio information, collected from the ear to the brain where it is processed and comprehended. However, when stereocilia become damaged they can send false signals to the brain, which is interpreted as the buzz of tinnitus. Sadly, as with hearing loss, there is no cure for tinnitus.

How often do you hear a noise in your head? Is it frequent enough that you find yourself frustrated and experiencing more stress than you’d like? Most people experience ringing in the ears every now and then but if the frequency of your tinnitus appears constantly enough that you feel you can’t escape it, then this can be a serious problem. The U.S. Centers for Disease Control (CDC) estimates that nearly 15% of the general public, or over 50 million Americans, experience some form of tinnitus. However, only 2 million people in the US report extreme and debilitating cases, making this a rare but serious condition. If you frequently experience the debilitating symptoms of tinnitus for six months or more you most likely have chronic tinnitus.

Dealing with Your Tinnitus

How does your tinnitus affect your life? Do you find that it is interrupting your sleep, making it difficult for you to focus on daily tasks, and making you exhausted to the point where you feel chronically depressed? If this is you, it is time to seek help.

You may find that holistic methods work for minimizing symptoms. Many people have found relief from tinnitus by a regular practice of meditation, yoga, exercise and even acupuncture. All these practices have been reported to reduce stress and can shift your focus away from the constant ringing in your ears. Other people have found relief in talking to a therapist about their tinnitus. Using a method called cognitive behavioral therapy, a therapist can help you prioritize other sounds and aspects of your life and mitigate an individual’s response to the condition.

Because tinnitus is so commonly connected to hearing loss, it is often also a sign of a hearing impairment. If you have tinnitus it could be time to schedule a hearing test!

Often people go years without being aware of a hearing loss, even though it is affecting their quality of life. It is common to use hearing aids to enhance your hearing ability as it can also decrease the effects of tinnitus. For one thing, it can reduce stress, brought on by struggling to hear the people in your life. There are also tinnitus masking features available on modern hearing aids which can cover up the annoying hum of tinnitus and allow you to focus on other things.

If the ring of tinnitus is making you feel stressed and out of control, take action today. Schedule a hearing test with us and get ahead of the buzz!